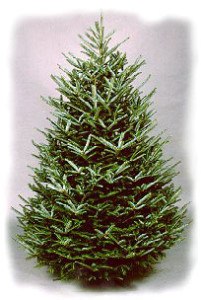 In many respects, Fraser fir and balsam fir are quite similar, although the geographic ranges of the two species do not overlap. Some scientists even suggest that because of the many similarities, the two species were once a single species which has since evolved into the present-day forms.

Fraser fir was named for John Fraser (1750-1811), a Scot botanist who explored the southern Appalachian Mountains in the late 18th century. The species is sometimes called Southern balsam or Southern balsam fir. Locally Fraser fir is known as “She balsam” because of the resin filled blisters on the tree’s trunk. Red spruce, often associated with Fraser fir, is called “He balsam” and lacks the distinctive blisters.

Fraser fir is a uniformly pyramid-shaped tree which reaches a maximum height of about 80 feet and a diameter of 1-1.5 feet. Strong branches are turned slightly upward which gives the tree a compact appearance.

Leaves (needles) are flattened, dark-green with a medial groove on the upper side and two broad silvery-white bands on the lower surface. These bands consist of several rows of stomata (pores). Leaves are 1/2 to one inch long, have a broad circular base, and are usually dark green on the upper surface and lighter on the lower surface. On lower branches, leaves are two-ranked (occurring in two opposite rows). On upper twigs, leaves tend to curl upward forming a more “U-shaped” appearance.

Fraser fir is monecious meaning that both male and female flowers (strobili) occur on the same tree. Flowers are receptive in May to June depending on elevation and other environmental conditions. The species is wind pollinated, and cones mature in a single season. At maturity, cones are 2-2 1/2 inches long with bracts longer than the scales and appearing reflexed (bent over).

The presence of these visible cone bracts is a distinguishing feature of Fraser fir as compared to balsam fir. Upon ripening in September to November, cones fall apart leaving an erect central core. Red squirrels are the primary consumers of seeds.